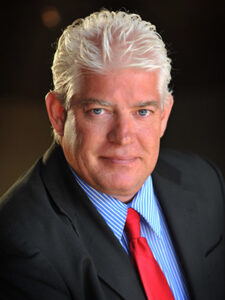 Students of Pierre Charmasson’s courses in the Meeting and Event Planning program at SDSU’s College of Extended Studies not only learn the secrets of a professional who traveled the world for two decades creating unforgettable experiences, they’re treated to the soothing and buttery voice of a former news, sports, and weathercaster in radio and television.

A broadcast journalism graduate of Northern Arizona University, Charmasson has reinvented himself numerous times. His career in radio and television was followed by a nine-year stint as head of his own corporate video and film production company where his voiceover and on-camera talents were an added benefit for clients.

Next he transitioned to the hospitality industry where, as director of corporate meetings and events for San Diego-based Professional Event Solutions, Charmasson wrote, produced, and directed corporate theater and served as technical show director for Fortune 1000 companies all over the world. And he freely shares all his knowledge in the courses he teaches at SDSU — Audio/Visual Basics, and Event Design and Production.

He answered a few questions about his career and the SDSU courses.

At what age did your unique voice become apparent?
In the sixth grade when I was going through puberty my voice changed and I knew then I would be doing something with my new deep voice.

Do you have a highlight to share from your career in television?
While covering a news story about a forest fire for KNAZ-TV in Flagstaff, Arizona, my cameraman and I noticed something shiny at the bottom of the canyon. It turned out to be a crashed helicopter, and one of the survivors started the fire to get attention. We informed the fire chief just in time as they were about to send in a plane with fire retardant, which would have killed the pilot and his passenger.

What’s a favorite “corporate theater” project you did as director of corporate meetings and events for Professional Event Solutions?
I created a unique holiday party for Genentech, a life science company based in Oceanside, CA. I bought out the newly-built Sheraton Carlsbad Resort & Spa meeting space and converted it all into what I called “Gville” where everything you did, ate, or experienced began with the letter “G.” Guests entered through the back parking lot, which dropped them off at Valet and directly into an outdoor reception area entitled “Glasgow Glow in the Dark Golf” complete with glow-in-the-dark miniature golf and glowing bars and drinks that were made with glowing ice cubes. Guests then could make their way up the back stairs to the outdoor foyer which was elaborately decorated in a Japanese theme entitled “Geisha Sushi Garden,” with sushi displayed on the throne from the 1956 movie The King and I. Guests could then enter the meeting space to experience a number of themed areas including a “Grape Grotto” wine tasting and education room (which had a human “statue” in a pond) or make their way down the hall to an adult “Guitar Hero” game room where players could compete against one another. Dinner was held in the main ballroom, which was entitled “Greek Garden.” This was the most technically elaborate room because we used projection to create a seamless 360-degree replication of the view of the Parthenon in Athens, Greece. Finally, guests were invited to the “Glam Club” for a Hard Rock Hotel-style after-party. Guests who wished to smoke were encouraged to retreat outside to the “Guantanamo Bay Cigar Smoking Lounge.” How’s that for elaborate?

What do you think are the biggest strengths of SDSU’s Meeting and Event Planning program?
I truly believe the strength of this program lies with the experienced instructors and their ability to “pass the torch.”

What’s a key takeaway from each of your courses — Audio/Visual Basics, and Event Design and Production?
For the AV class I think the key takeaways are the basic understanding of the gear and how to fit the right AV equipment with the goals and needs of the client. I believe many meeting and event planners fear AV because of its technicality and its jargon. I break it all down and explain it in plain English with a little humor. As I tell them in class, “I’ll teach you just enough to be dangerous.”

The key takeaways in the Event Design and Production class are creative tips on how to wow the client, and simple design techniques to work within your budget.

What kind of activities/homework can students expect from each course?
I try to use a hands-on approach in the AV class so students can play with the equipment. In the Event Design and Production class, I challenge my students with in-class creative exercises and fun theme development ideas.

How often does each course meet and how many hours per session?
I teach the Tuesday and Thursday classes that run from 6–9pm.

What are the top qualities that make a person a good candidate for a career as a meeting and event planner?
Control freak, attention to detail, and a good sense of humor.

What are students most surprised to learn about this career path?
How to make a living as an event planner or meeting professional. I share with every class my blueprint for success with the tools I’ve developed over the years.

You also founded Artisan Voice, a benefit auctioneering company. How did you get into that and how long did it take to perfect the technique?
I first got into auctioneering back when I was a TV news guy and someone asked me to be the celebrity emcee at a posh event in Phoenix. The auctioneer didn’t show so they asked me to give it a go. The client commented to me, after the event, that I was better than the auctioneer scheduled to appear and would I come back next year? I of course said yes. I developed my own style of calling charity auctions, which is very different from auctioneers that do livestock, homes or cars. I guess you could call it entertainment auctioneering because I try to use a little showmanship, humor and playful tactics to up the bidding.

What do you enjoy most about your job?
I’m not a rich man but as a professional benefit auctioneer I have generated millions of dollars for some of the most deserving nonprofits, charities, and schools in America.

What did you want to be when you grew up?
I haven’t grown up yet according to my wife … but as a kid I guess the cliché answer would be a pro football player. My bucket list still includes being a stadium announcer at the Olympics.